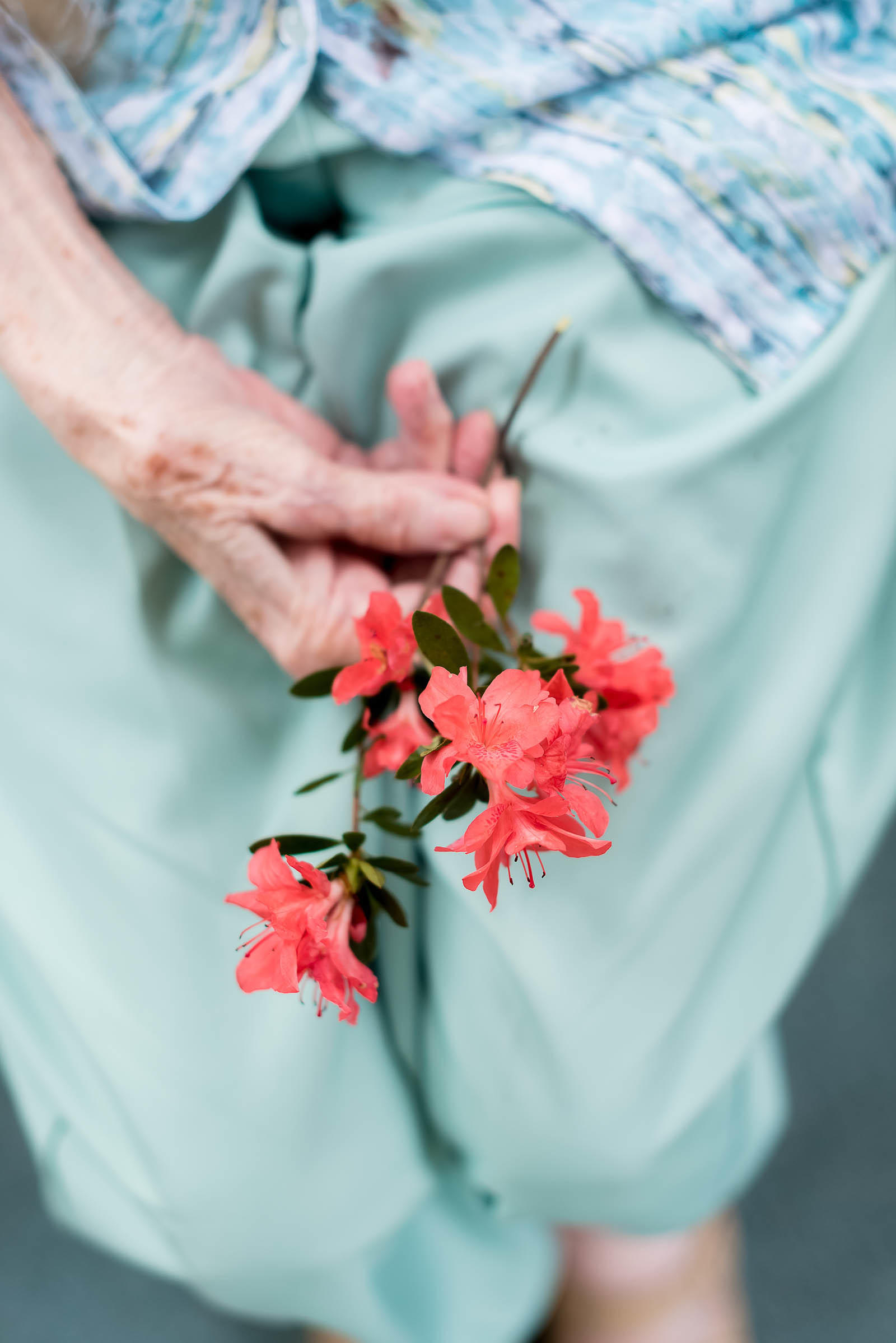 I’d be lying if I didn’t say this past week has been one of the hardest of my life.

For the last 14 months my grandmother’s health has been an ever-present rollercoaster. Her deepest wish was to pass away at home but each month after her stroke last Thanksgiving made that wish more and more of a challenge.

But last Thursday her wish was granted.

Last Thursday, without once being admitted to a nursing home, she passed away peacefully and without pain in her home of over 55 years.

I’d be lying if I didn’t admit this has all come as a shock.

Despite the fact that she’s been living on “borrowed” time since her stroke last Thanksgiving, I’m still finding the finality and drain of this week to be more crippling than I care to admit.

To realize I’ll never hear her sing-song voice calling down the hall. Or smell that Joy perfume she always wore. Or watch her give her cat Marty a kiss before bed.

Despite the fact that I lost my father over 7 years ago, I still find myself daily struggling with the finality of death.

And yet I KNOW exactly what my grandmother would say to me right now if she were here. She’d tell me to celebrate her life, not to mourn it.

And so, just as I did for my beloved Nana when she passed in 2015, I’ve compiled a list of my grandmother’s greatest lessons in the hope that I’ll always remember them. And in the hope that her legacy can live on through the best in both my sister and I…

10 Life Lessons I Learned from My Southern Belle Grandmother

My grandmother taught me more lessons on positivity than any other person I know. Despite watching her husband sink into Alzheimer’s and caring for him for over 6 years. Despite burying her one and only son at 58.

She taught my sister and I that life is full of knocks. That it’s not the knocks that dictate your happiness, but how you deal with them. I know I’d never have been able to recover from my father’s tragic passing without her constant guidance and positivity.

I’d be lying if I didn’t say I’ve ALWAYS been a dog person. Immediately after graduating college I adopted little Apollo — and it was one of the best decisions I’ve ever made in my life.

But my grandmother was certainly a cat-person and over my life she’s taught me just how special a furry feline can be to. Her relationship with her all-black cat Marty (who she never for one moment believed was bad luck) was truly one of the most beautiful I’ve ever seen between a pet and their owner.

And you have to believe that this week has been one of the hardest for Marty too. The adjustment without his Mama has been just as traumatic for him as it has been for us humans.

My grandmother, from the time my sister and I were very little, never failed to fill her fridge with fresh-made butterscotch pudding every time we came to visit.

And wow did it cure just about any problem or issue you might be having. One sweet, creamy bite and you could practically feel your troubles melting away.

I’m not quite sure how she did it. Despite the fact that I buy the same packets I can’t ever get mine to taste quite like hers. But then again most grandchildren know what I mean — when grandma makes you food with love, you can taste the love just as much as the other ingredients.

For those who have known a true Southern Belle in their life, this lesson doesn’t come as a surprise. Southern Belles believe in kindness and generosity to ALL, and never fail to make even quickest of visitors feel like family.

The very first thing out of her mouth every time I walked through the door was “can I offer you something?”. She never rested when guests were over — a hold over she had even at the very end when her mobility was non-existent but her gentle politeness unwavering.

5. When In Doubt, Wear Pink

My grandmother was quite the “girlie girl”, collecting angels, butterflies, and flowers all around her pastel-hued house. But she especially believed in the power of the color pink.

To heal, to uplift, to brighten.

It helped that she always looked good in pink, and that much of her closet was pink. But she truly believed wearing pink made her more positive and proved it time and time again to the very end.

And on Tuesday she’ll be buried in pink, undoubtedly so she can always wear it forever and ever.

I’d be lying if I didn’t say my relationship with my grandmother had its strains.

During the course of my father’s illnesses and inevitable death, we had our fair share of fights over his care and wishes. And certainly we took our pains and frustrations with his early departure out on one another for well over a year after his death.

What can I say, we were human. And the pain of his tragic departure was certainly more than we ever bargained for.

But my grandmother taught me the power of unconditional forgiveness too. And soon, after that first year of mourning, we came to depend on one another for comfort and healing after his death.

She was truly the only person besides my sister who understood, really understood, how much his absence hurt. How much of his vibrancy was stolen from him too soon. Just how special of a person he really was.

Without her lesson in forgiveness I would not have been able to come to terms with my father’s passing, I know that. I know that her many hours on the phone telling me stories of his childhood, healed me more than any therapy session could.

I’ve alluded to this lesson before — being a Southern Belle raised in Georgia and then living in rural Florida for over 50 years, my grandmother KNEW how to deal with heat and humidity.

She NEVER left the house without a thermos of ice water.

I remember it used to drive me crazy — we’d all be sitting in the car ready to go and she’s always have to stop and run in to fill her thermos last-minute. But as I got older I began to appreciate just how necessary it was and now I find myself carrying a water bottle with me everywhere too. I may not live in quite such a tropical climate (the only palm trees we have live in Conservatories) but this lesson has saved me from many parched, dehydrated moments over the years.

Not to mention that I truly feel my grandmother’s remarkably unwrinkled skin was due half because she never tanned in the sun and half because she was always so diligent about hydrating with water.

8. Do Your Dishes At Night

I wouldn’t say I’ve “learned” this lesson but I certainly know I should.

My grandmother was always cooking and entertaining throughout my lifetime, amassing countless dirty dishes and pots each and every time I visited.

But no matter how tired she was or how exhausted, she NEVER failed to do ALL the dishes before she went to bed. She always told me that no matter how much of a mess you make, if your sink is empty in the morning, you’ll never be over-whelmed by the messes.

9. Listen to the Big Bands

Without fail whenever I walked into my grandmother’s house, big band music from the 40’s was always playing on the radio. She listened to Dean Martin when she cooked, Frank Sinatra when she felt sad, and Louis Armstrong round-the-clock.

In fact, one of her biggest requests for her funeral was that we end it playing “It’s a Wonderful World”.

And, indeed, when Louis Armstrong sings that, it’s hard to feel like the world is anything short of wonderful…

My grandmother, unlike my Nana, never travelled extensively — mostly around the Caribbean with a few other trips around North America and to Alaska.

But she also never stopped wanting to travel and see new things, even if they were just in the next town over. She always said she would have loved to skydive — even saying that during my visit for her 91st birthday in November last year.

And she loved to drive fast, living life on the edge like she was a NASCAR driver (and indeed, with as much NASCAR as she watched, she probably envisioned herself more in a zippy sports car than her old Buick).

I always loved how fearless she was when it came to her adventures, always approaching things with an open-mind (well, except for sushi which I never could convince her to try). She always sought novelty and frequently said “as soon as I stop learning, I start dying”. A sentiment I hope to carry on to the end of my life as well…

I love you Mama Jean. I know life will never feel the same without you.