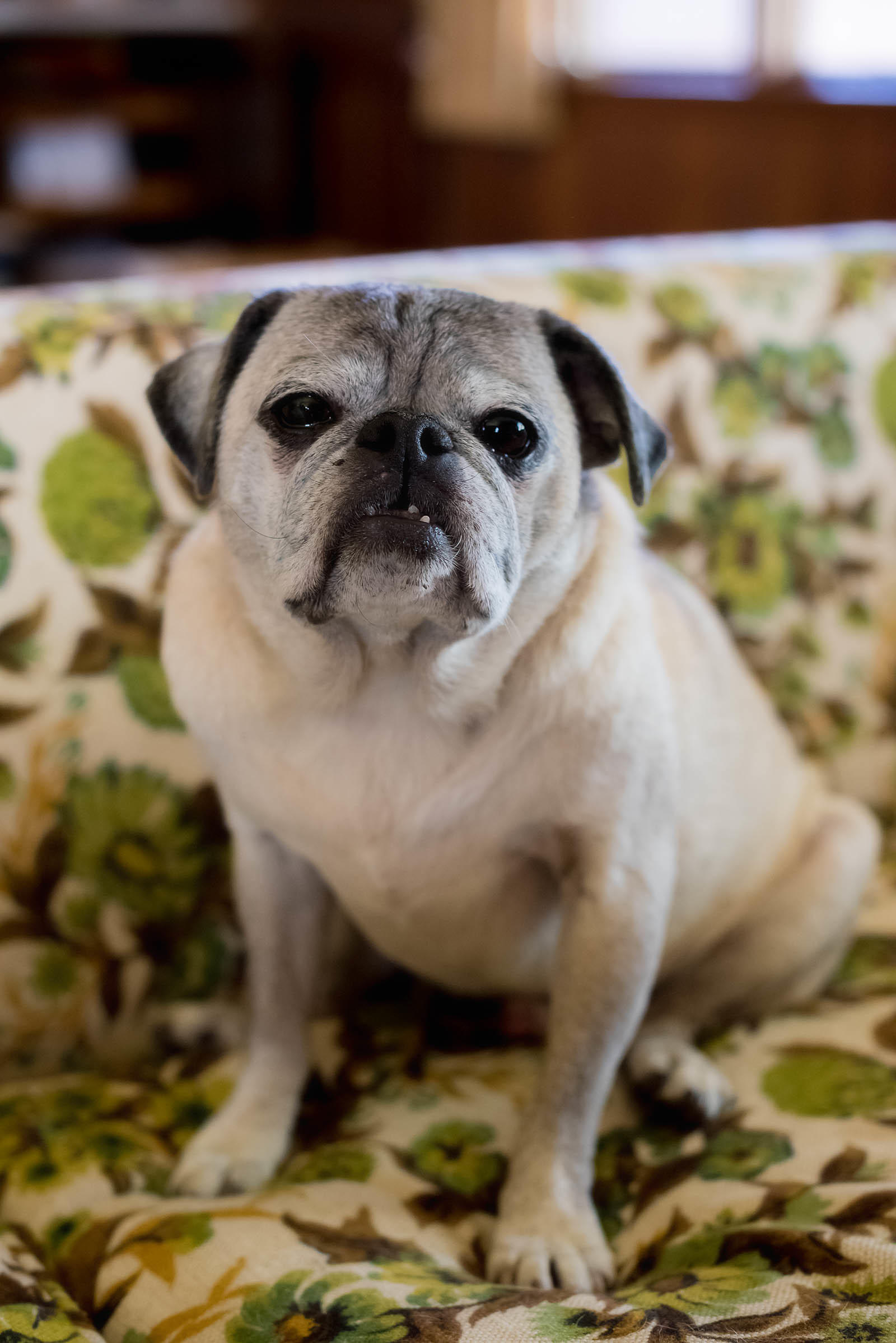 Though I am widely known as “the #PugVase” lady among both friends AND strangers thanks to my dear pug Apollo’s willingness to model in my floral flatlays, most people are SHOCKED to learn that I actually have a second pug named Johnny.

He’s our oldest pug (we adopted him from rescue when he was 5.5 years old back when Apollo was only 3) but I almost NEVER share photos of him. Why? Because he absolutely hates being photographed. Give him one-on-one attention and he’ll eat it up. Put a camera between him and yourself and you may as well be ready to break his heart.

But this past Sunday was our wizened old pug’s 10th birthday and I just HAD to pose him for a few birthday shots, just like I did for Apollo back in April.

And since most of you probably don’t know hardly anything about this amazing boy, today seems like the perfect opportunity to tell you about one of our closest and most loving family members. 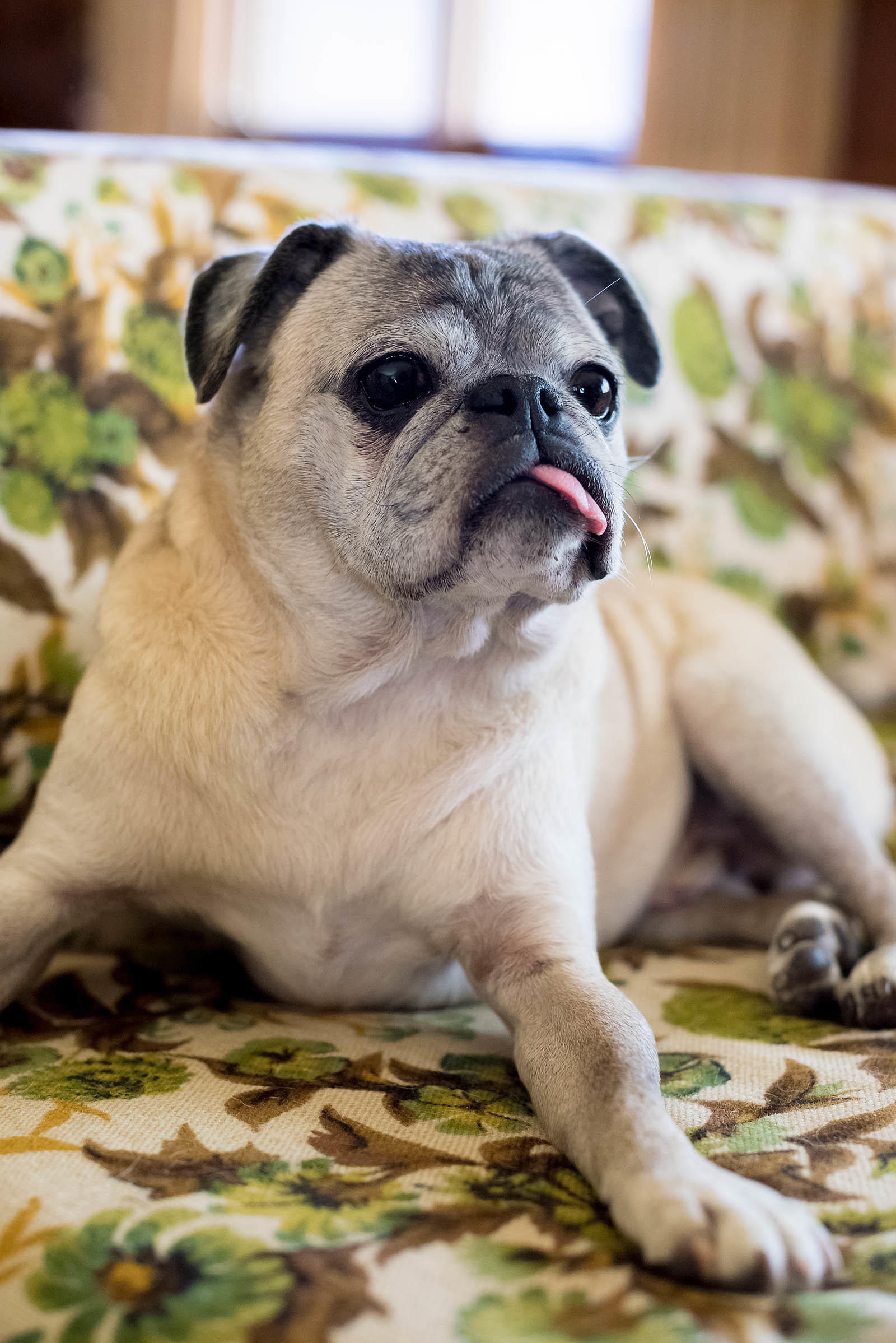 10 Things You May Not Know About Johnny

1. He has A LOT of medical issues.

Johnny suffers from severely acidic urine as well as several liver issues. These conditions can play off of one another to form blockages of crystals in his urine stream that need to be (expensively) surgically removed. To mitigate his condition, Hubby and I give him a cocktail of medications every morning as well as a purely liver-focused prescription diet. We check his urine at least one a week to test his pH and do our best to keep him as active as possible. While Johnny had to have two surgeries to remove the crystals before Hubby and I adopted him, knock on wood he hasn’t had to have one since! It’s been four years and hopefully plenty more!

2. He’s been in rescue THREE times.

By the time Hubby and I met Johnny in June 2012, he’d already been in rescue THREE times. This was primarily due to the cost of his medical expenses associated with his conditions which can be — quite honestly — astronomical at times. When Hubby and I adopted Johnny the first thing we did was set up a savings fund for any emergency medical issues he might have. We’ve been lucky to avoid any MAJOR expenses thus far but it makes us feel a lot safer knowing we have the money to cover any surprise costs if Johnny’s condition ever worsens.

Maybe it’s just because he’s been in rescue three times but you’ll never meet a dog more surprised and grateful to receive love. Back when we first adopted him, Johnny wouldn’t even look us in the eye when we called his name. His previous owners had clearly never talked or interacted with him much. For the longest time Johnny didn’t understand when we’d try to interact directly with him — it took him months to figure out we were talking TO him. But once he finally figured it out, he LOVED it. Give him even the tiny smidgen of love and Johnny will coo, woo, and love all over you with a fierce gratitude you’d never find in a dog not from rescue. 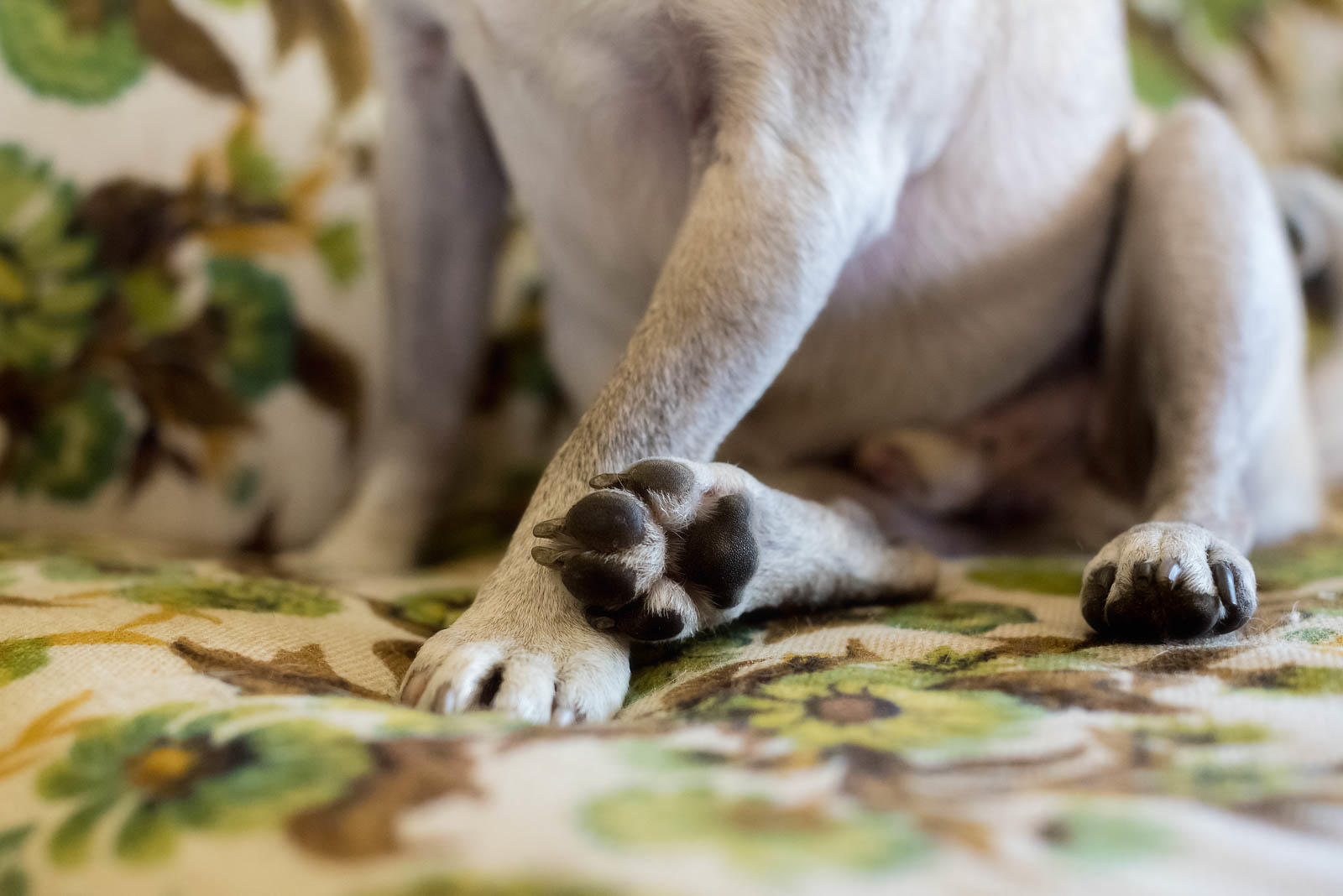 4. His Life Revolves Around Food.

Seriously. If Johnny had a middle name it would be “Dinner”. Without fail, day in and day out, Johnny knows exactly when his feedings are. Come 8 am or 6 pm, he will — often vocally — let you know it’s MEAL TIME! One of the funniest things we discovered about Johnny years after adopting him from rescue was that one of his previous owners must have given him treats and called them “cookies”. One day I was making a batch of shortbread cookies and somehow ended up shouting “cookies” to my husband in the other room. Johnny instantly leapt into action and promptly stood under my feet, clearly expecting to be given a cookie!

Not a trained fighter. But sometime in one of his previous homes he must have been attacked by a larger, golden-haired dog. Hubby and I suspect this since pretty much every time we go near a golden retriever in our neighborhood, Johnny goes absolutely wild. While Apollo has almost no “small dog, big dog mentality” issues, Johnny has them in SPADES. Johnny sees a larger dog and I swear is barking “let me at ’em!”. Since I don’t know what happened to him exactly to trigger these outbursts, it’s been hard to reverse train it out of him. Some days he doesn’t get fussy at any golden-haired dogs. Other days he reverts right back to his original training. I’m not sure we’ll ever get him completely past this fighter mentality but we still try everyday to show him that most large dogs could not be sweeter or more loving.

6. He Can’t Live Without His Triangle.

Back when Hubby and I adopted Johnny in rescue, his foster-mother assured us that he absolutely HAD to take one toy with him to his new home — a humble, bacon-flavored triangle (similar to this). At first, we didn’t understand quite what she meant but it didn’t take us long to figure it out… Johnny has many anxiety issues associated with his times in rescue and his many homes. At some point he must have been abandoned by a man with a suitcase because when Hubby was commuting between Chicago and Philadelphia all last summer, each week Johnny would absolutely freak out as he left. At first we figured he just missed Hubby but then when he did it with a few relatives and friends as well we knew it had to have been something more. Either way, thank goodness he has his triangle to chew and grind away his anxiety on (and keep his teeth clean and healthy). 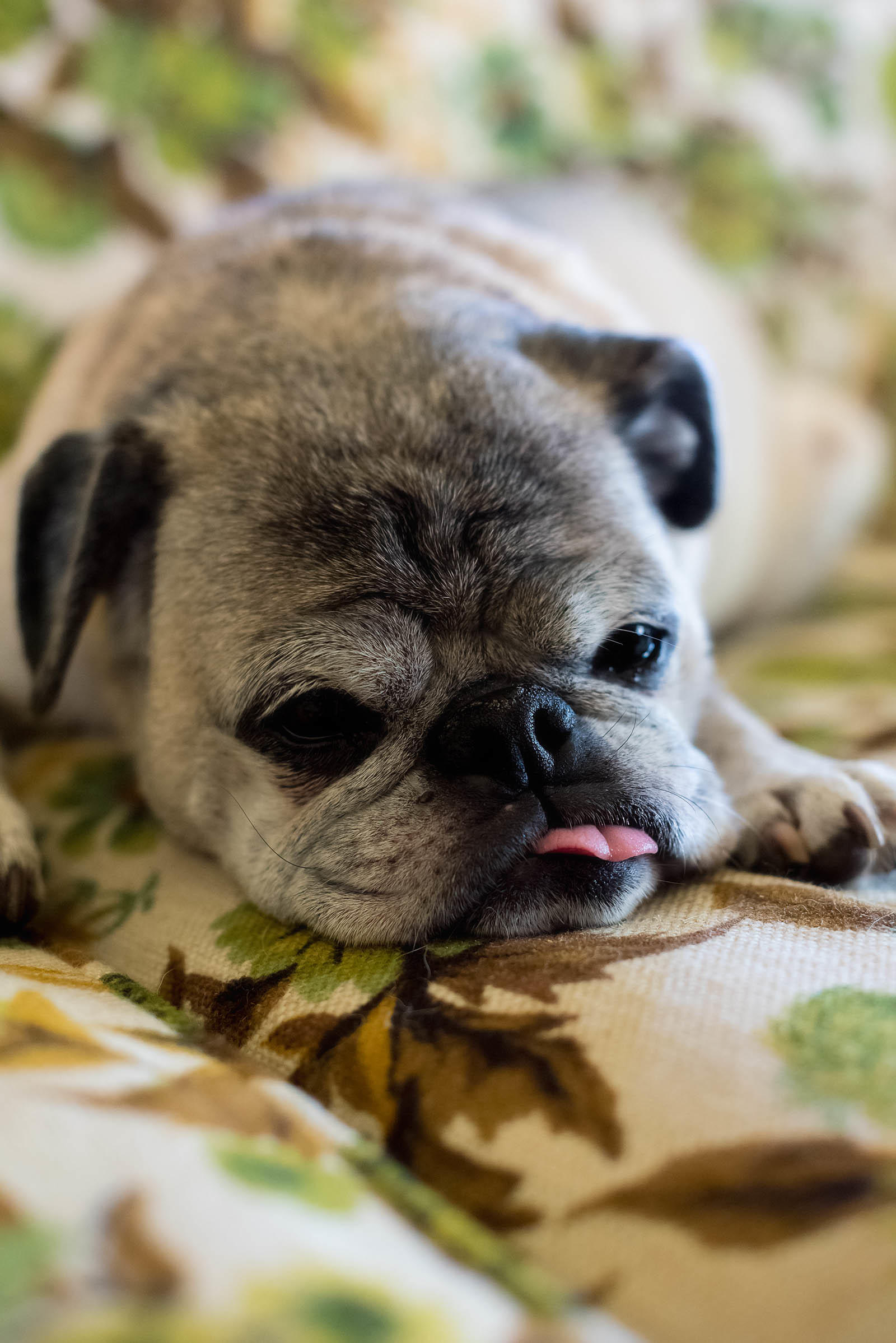 As in, he follows me around EVERYWHERE. To the shower, the toilet, the closet, to my desk — good luck keeping this loving boy from his Mama. Since Johnny suffers from somewhat severe anxiety, I’m so grateful my flexible job schedule allows me to be home with him as much as possible. I can’t even imagine what a basket case he’d be if I still worked full-time in an office. He certainly doesn’t realize how spoiled he is being able to sleep in his Mama’s lap while she works!

Since our pugs are now 10 and 7 years old, we do our best to keep them as active as possible. We walk them 3 – 5 times a day, into Lincoln Park whenever possible, and make sure they get a good run or jog in each week. For a 10-year-old Johnny, he’s surprisingly active, bounding and leaping around the house like he was a gazelle. I know someday he’ll start to slow (and I have noticed jumping onto our bed is becoming a struggle) but for now I’m unbelievably grateful he stays so active and busy. Well, most of the time… 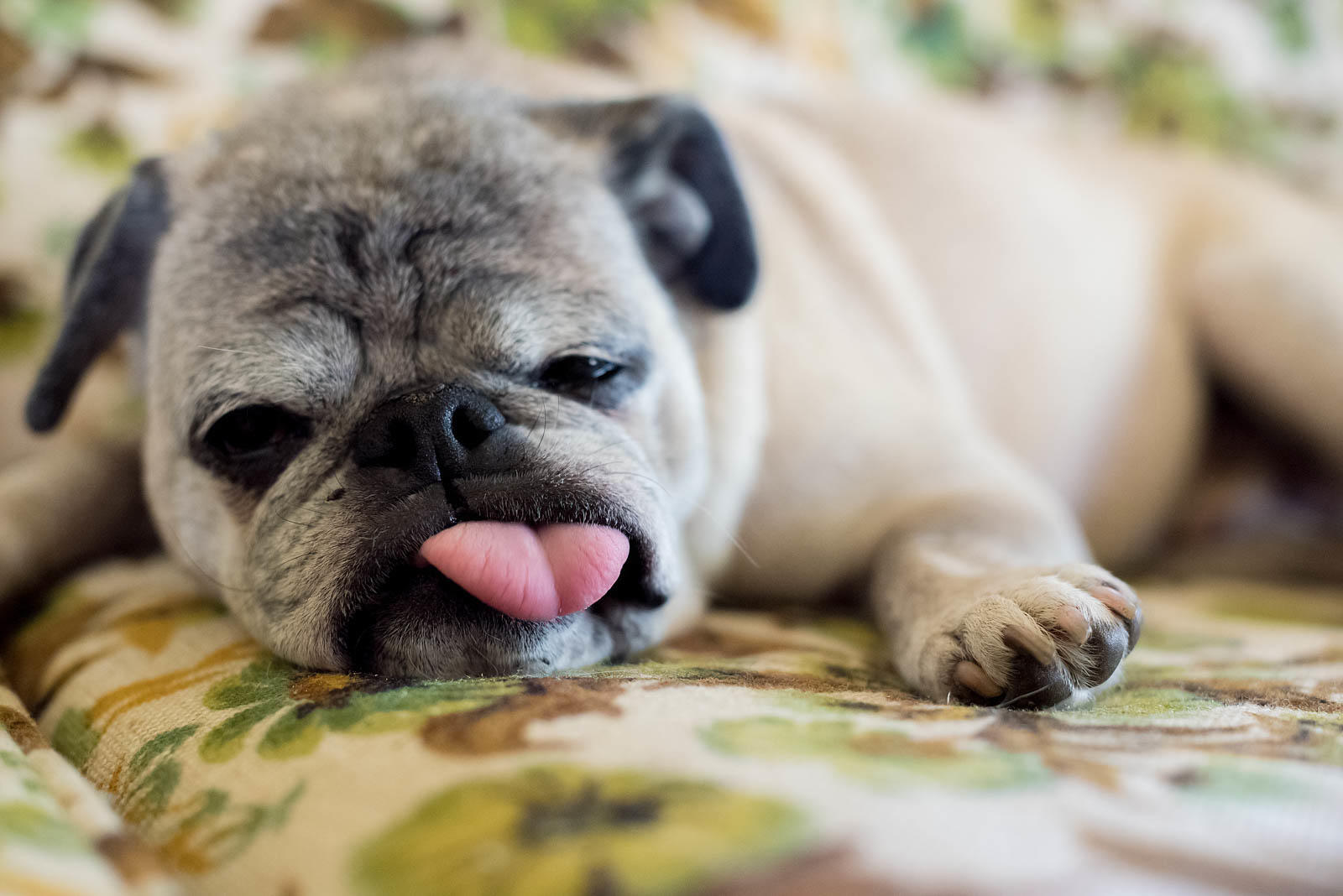 It’s been so interesting to watch Johnny age over the years — when we adopted him he still had a pitch-black pug face. Now the gray has slowly encroached upon his entire snout leaving him with just small traces of his black fur. Eventually in a few years all his fur will turn completely silver!

And I don’t mean that lightly. You can search your whole life for a dog as ridiculous, silly, and confused as our Johnny. Search the whole world and I’m not sure you could find one. He derps out ALL the time. After long car rides, he’s passed out like a limp noodle on the couch, tongue out an inch or two for good measure. And when he looks at you with his enduringly confused but trusting face, it’ll melt your heart. While Apollo may be our smart pug, Johnny most definitely is our derp pug. 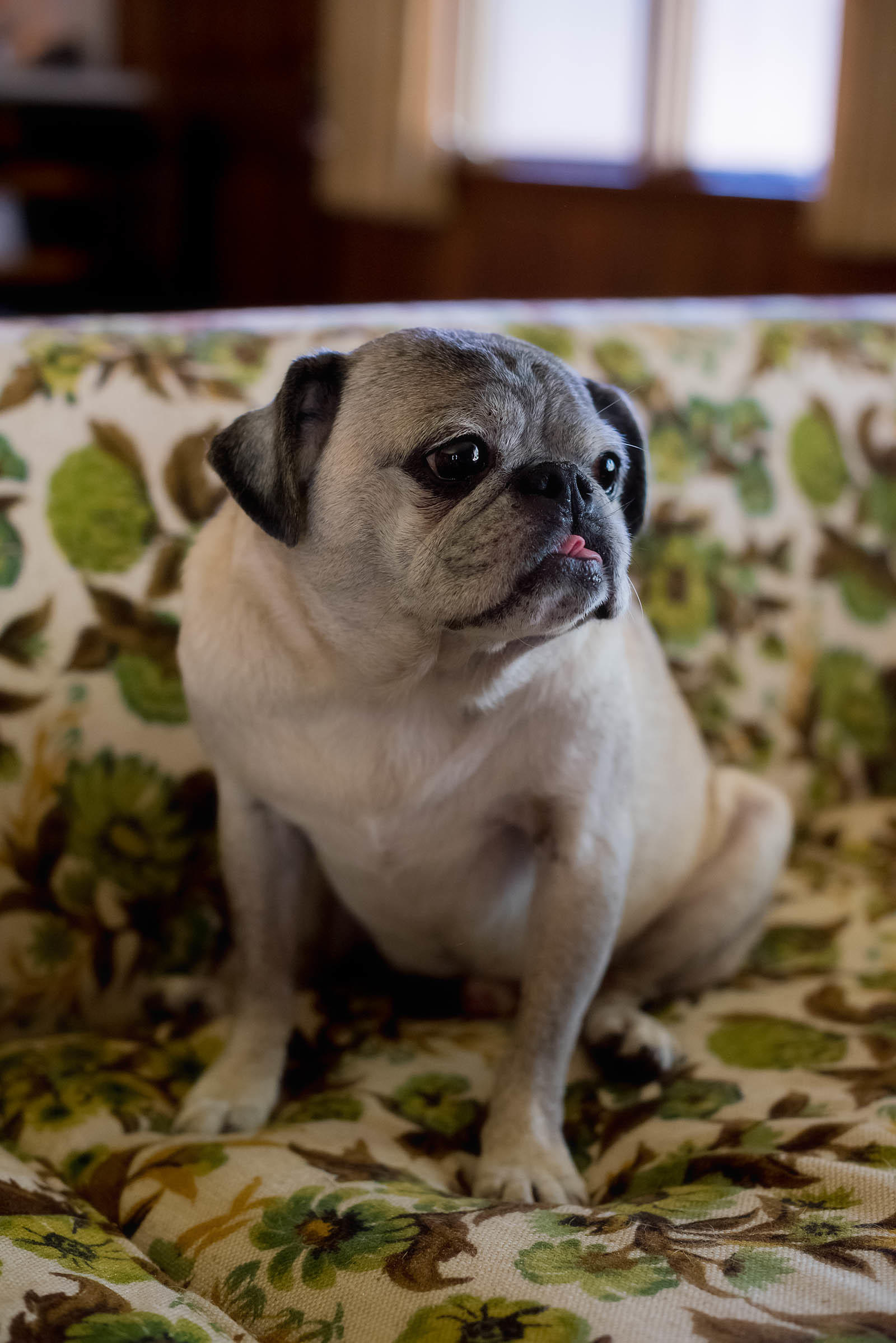 Psssst, do you think Apollo was sad to be left out of this photoshoot… 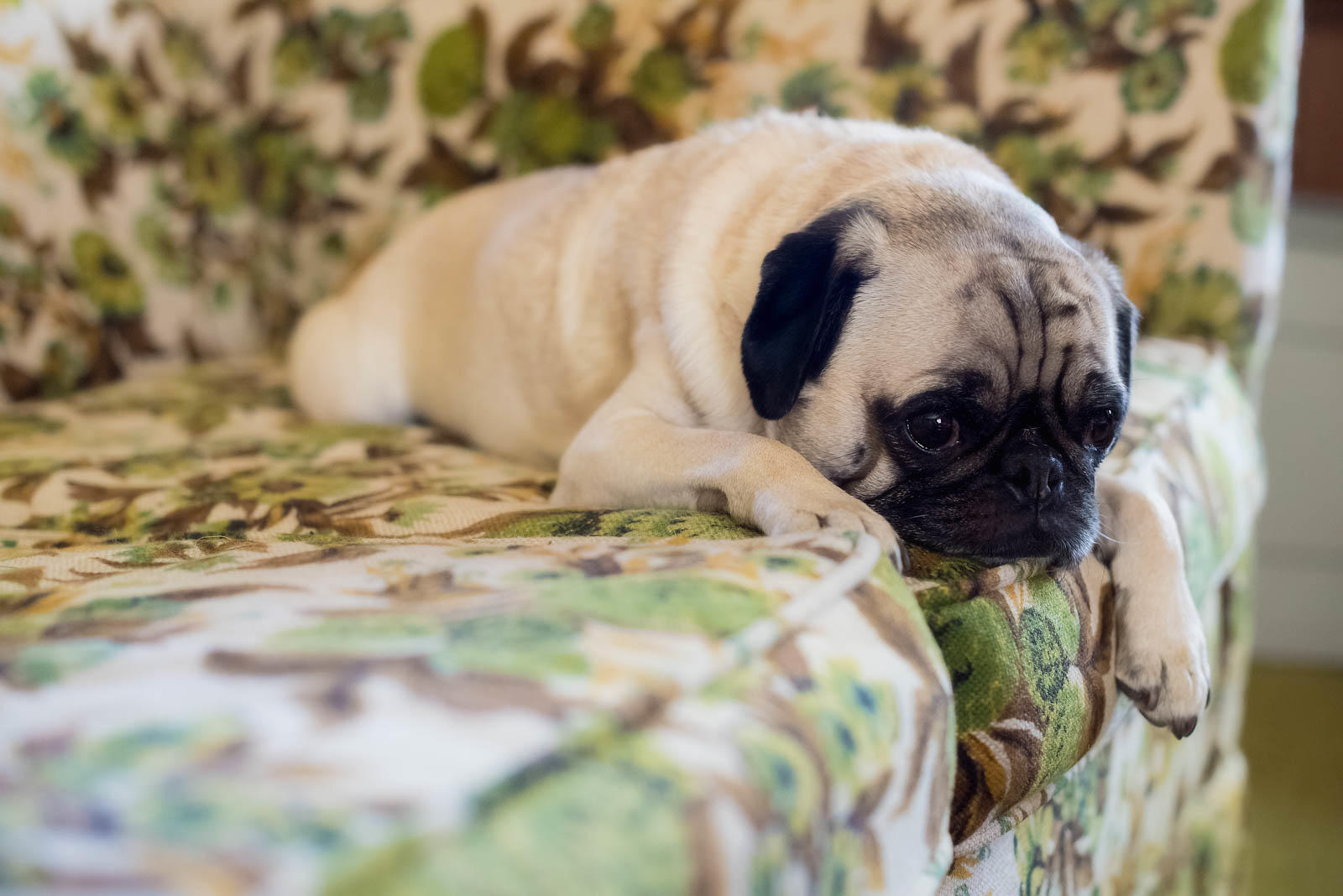 Tiptoeing Through the Pumpkin …

Obsessing Over… My Victoria …