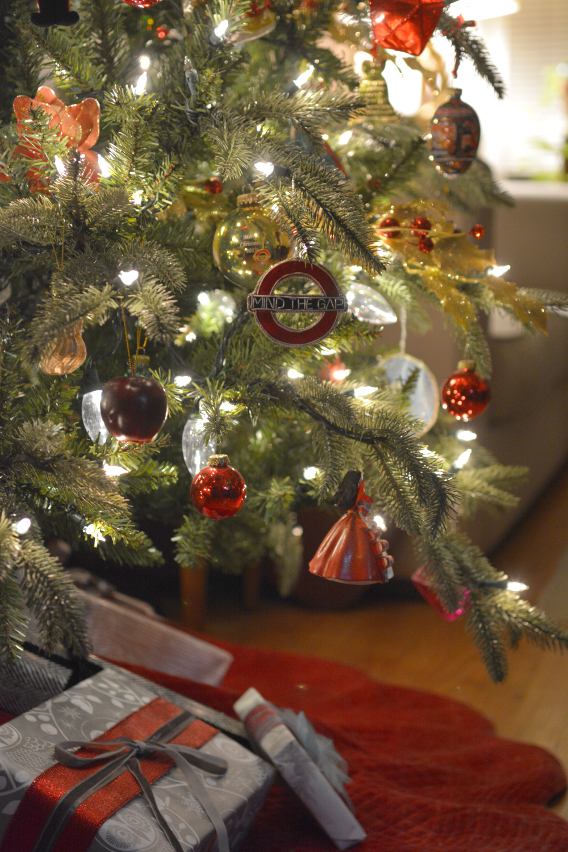 Christmas has always been a very sentimental holiday for me. I have so many warm memories of decorating the Christmas tree with my parents and sister as a child. We would watch our favorite Christmas film, White Christmas (inevitably my sister and I would break out into the “Sisters, Sisters” song) and unwrap each ornament. As we unwrapped, we would get distracted with the memories each triggered and we would all laugh and sometimes cry at the nostalgia each bauble brought.

As an adult, this ornament ritual has manifested itself in a serious addiction to collecting fun and random ornaments. Lots of us have personal collections of knick-knack we’ve collected from our travels: my mother collects magnets, my grandmother collected figurines, I collect ornaments. You could say I’m an ornament addict… with no rhyme or reason to my choices. Yes, it means our Christmas tree may not be the most cohesive or themed tree but because there are so many different types of ornaments, it makes for a fun narrative for guests and an addiction I certainly find both amusing and satisfying.

Here are a few of my favorites (naturally I forgot to include quite a few): 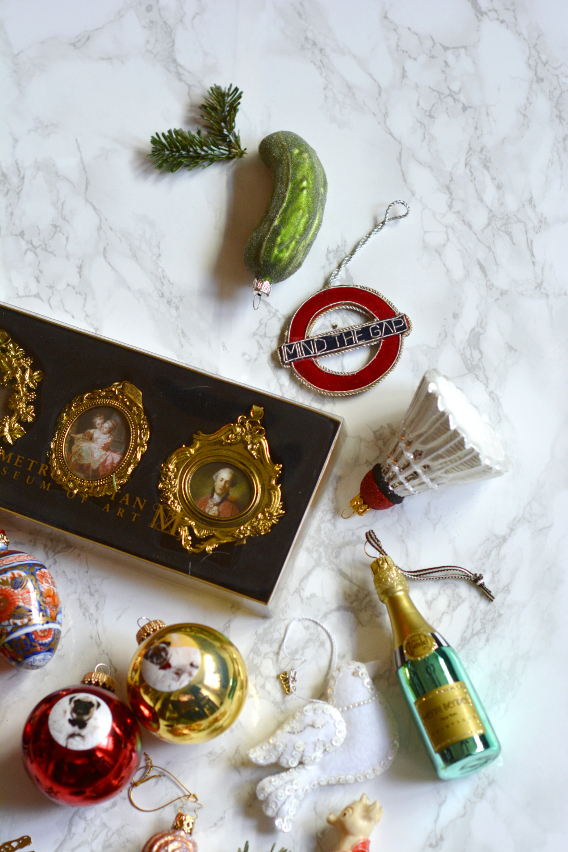 Let’s start with the pickle ornament at the very top of this photo. I bought that at Chicago’s Christmaskindl Market many years ago to begin the tradition of hiding the Christmas pickle on the tree every morning with my Hubby. It’s been a lot of fun and hopefully has brought us some luck and prosperity over the years. 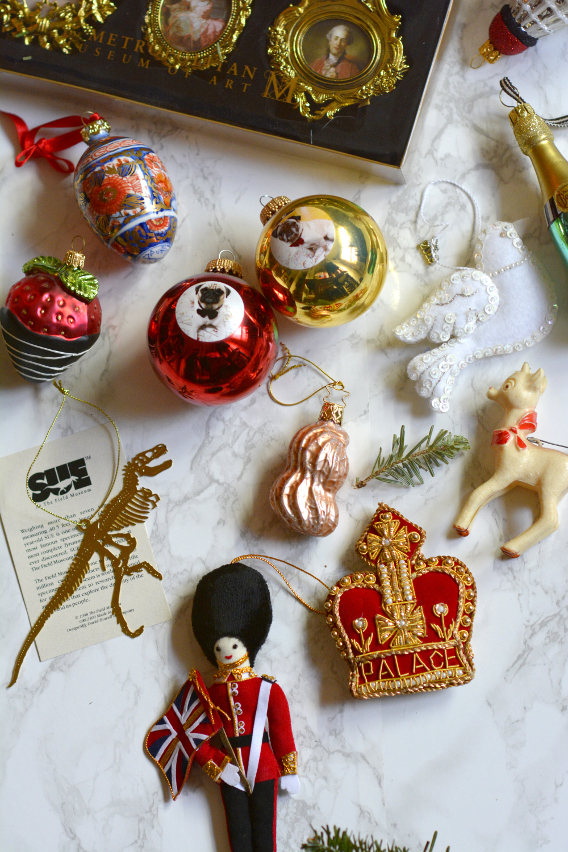 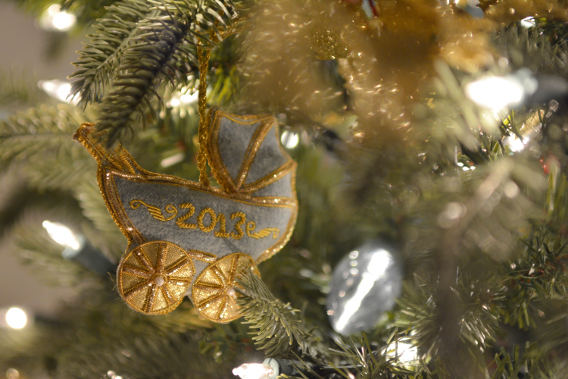 Like many self-respecting Anglophiles in 2013, I anxiously awaited the arrival of Prince George with the same fervor I had in 2011 during the Royal Wedding. I bought this ornament here (on sale!) to add to my ever-growing British ornament collection (which you will see below). 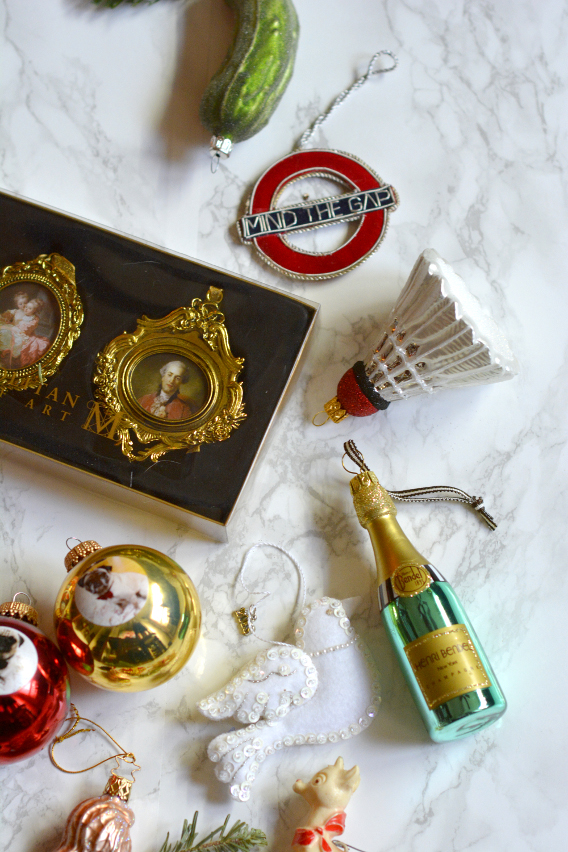 The “Mind the Gap’ ornament next to the Christmas pickle above is case-in-point. I bought that ornament on my last visit to London in 2011 after my Hubby and I started a little inside-joke about “minding the gap” while riding the Tube. Apparently we aren’t the only people to find this polite sentiment amusing since it was immortalized in ornaments for tourists to take home. 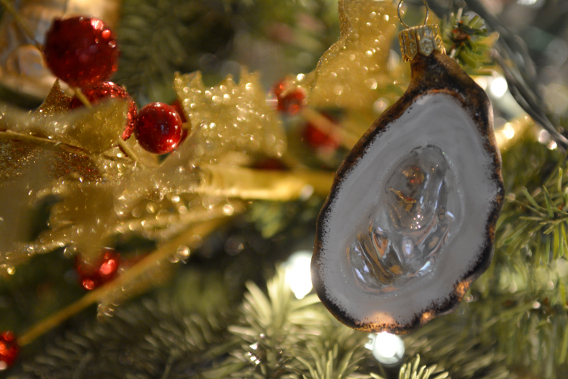 Another random theme among my ornament collection is culinary ornaments, like this Sur la Table oyster ornament (currently unavailable but will hopefully be restocked after Christmas). 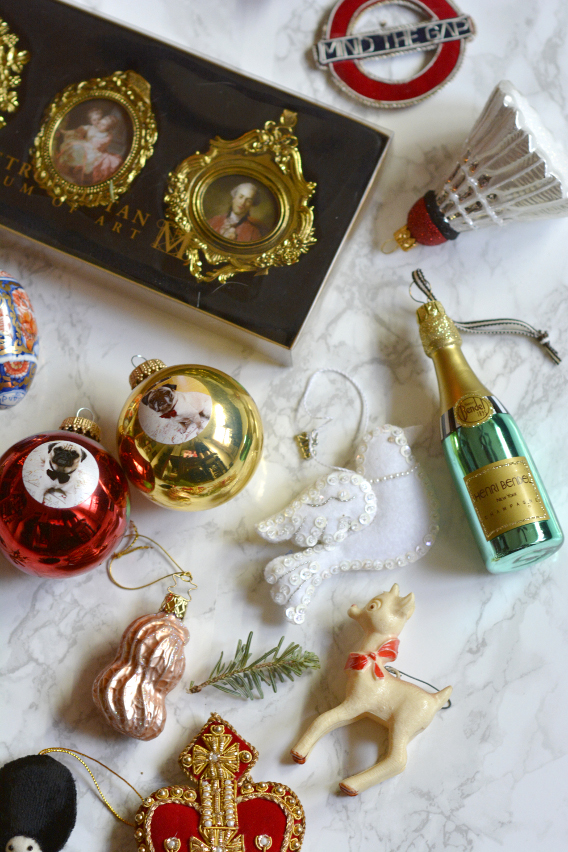 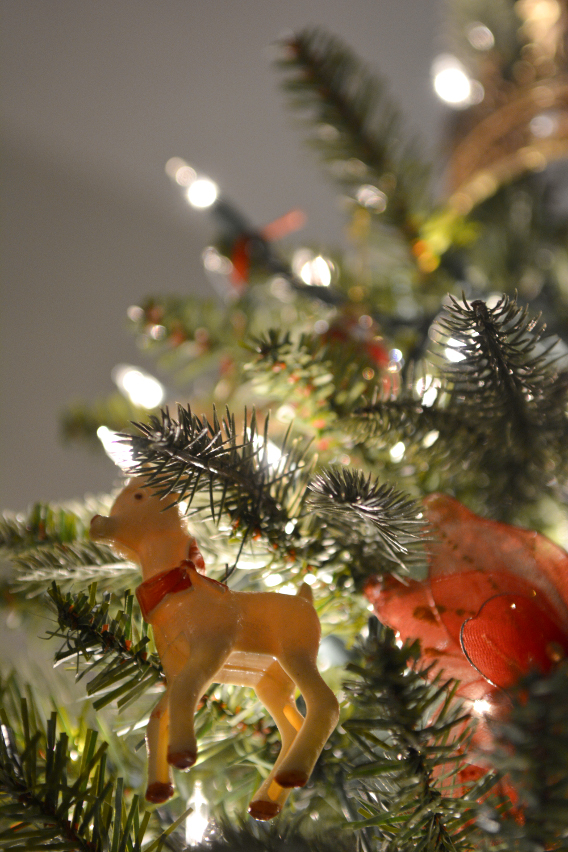 The most important ornament I have in my collection and one I always put near the top of our tree where you can see it well is this pale, faded vintage Rudolph. This ornament has been on every Christmas tree I’ve ever had. It was my father’s favorite ornament, named “Steve’s Rudolph” (after my father — I believe it was a gift from my grandmother when he was a child) and is always the very first ornament I hang on our tree each year. 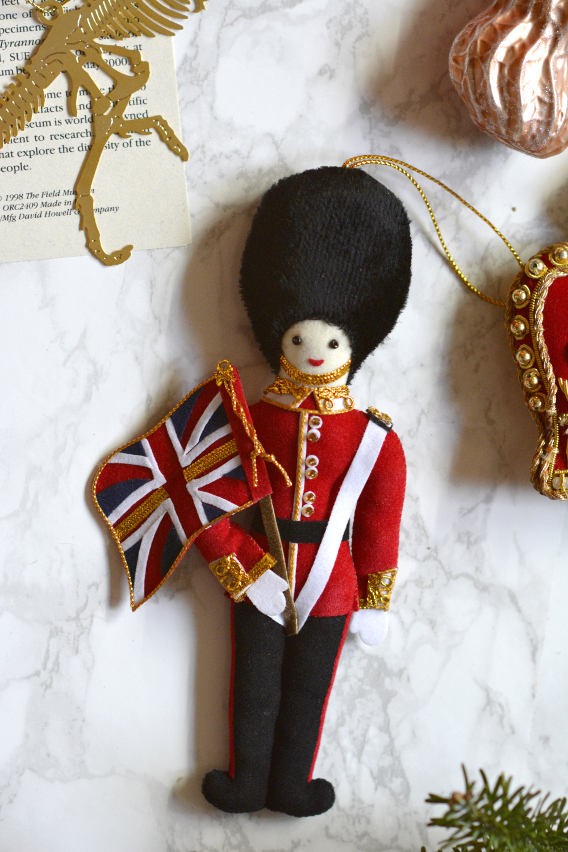 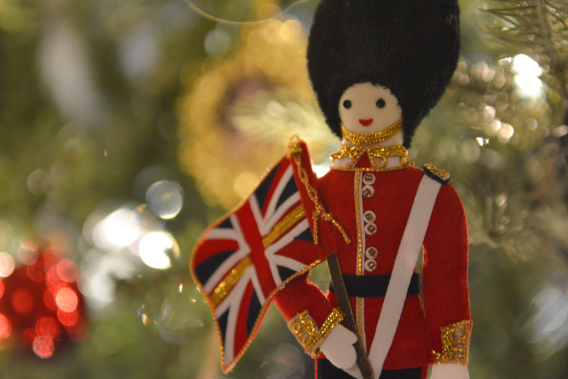 This Buckingham Palace Guard is a souvenir from my last trip to London too (I also bought an ornament from the Royal Wedding since it was in 2011 which I forgot to include here). I love all the cloth ornaments I bought in London, especially since I’m a little accident-prone and cloth is far less breakable. And any self-respecting Anglophile needs at least one Palace Guard on their tree, don’t you think? On sale here. 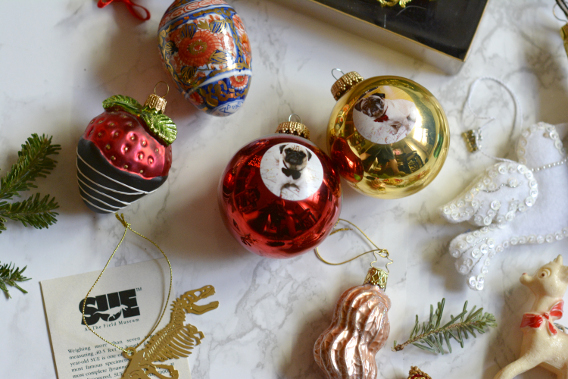 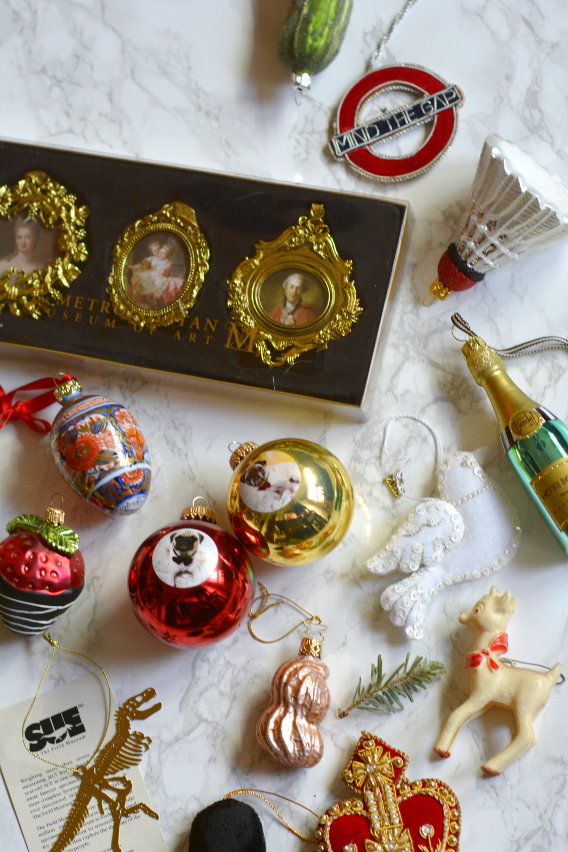 On the red and gold ornaments in the middle of this flatlay, you may see two familiar faces! These ornaments were a gift from my mother-in-law of our pugs, Apollo and Johnny. Nothing like having your own “fur babies” star on personalized ornaments! 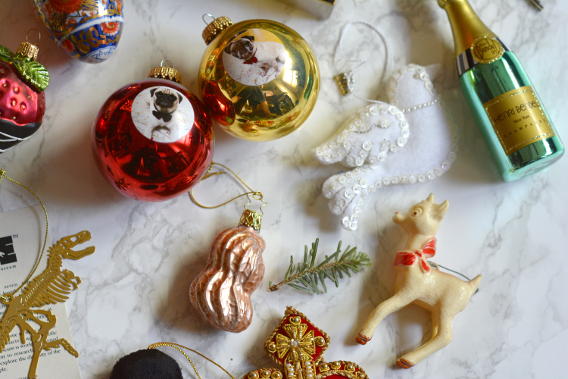 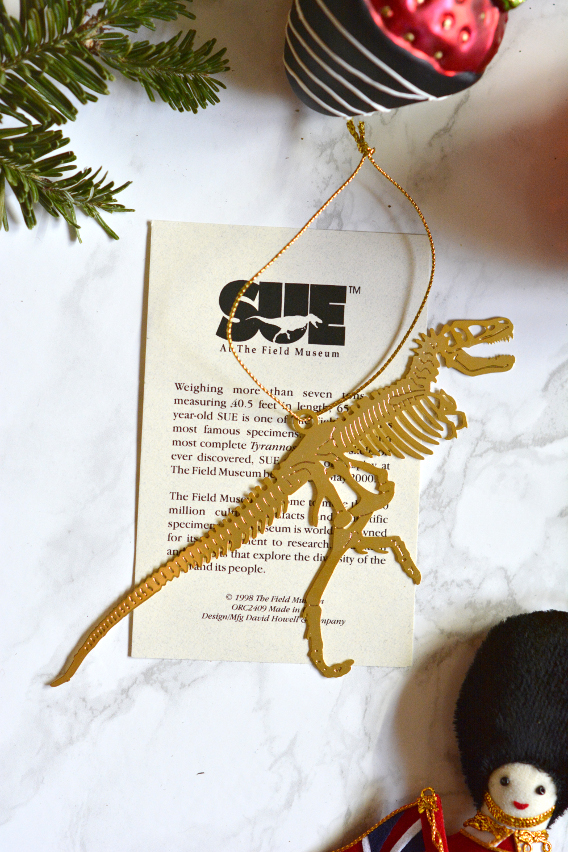 This ornament relates to Hubby and I’s deepest inside joke from the very first month we began dating. Sue is the largest, in-tact T-Rex skeleton ever found and she is on display in Chicago’s Field Museum, where I bought this ornament for H and I’s first Christmas together. Let’s just say that I married “a boy named Sue”. 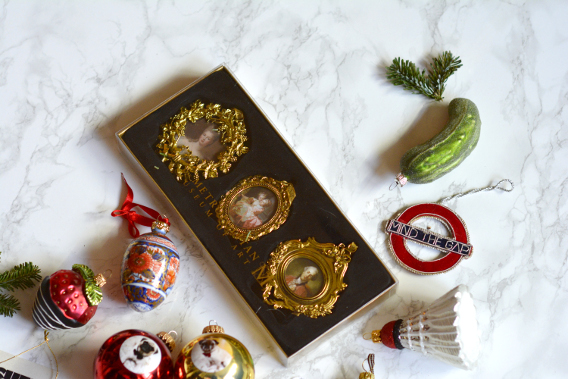 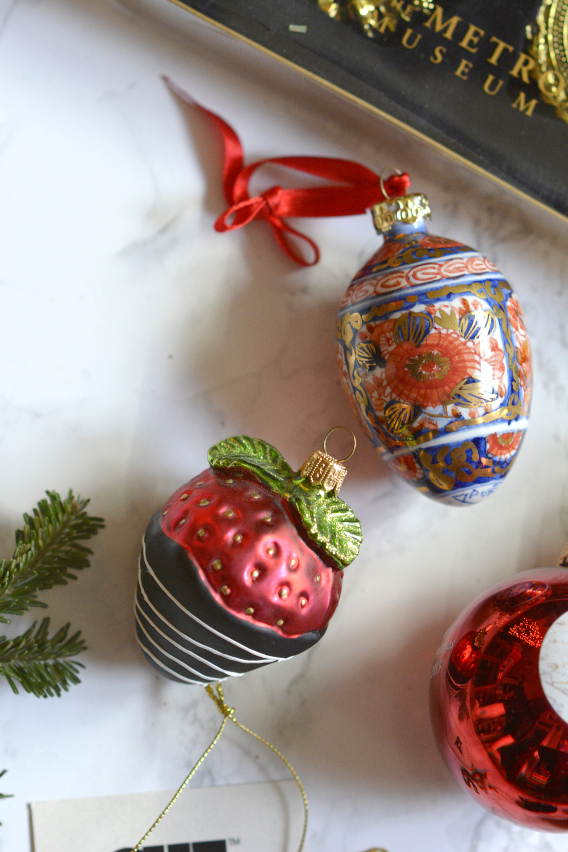 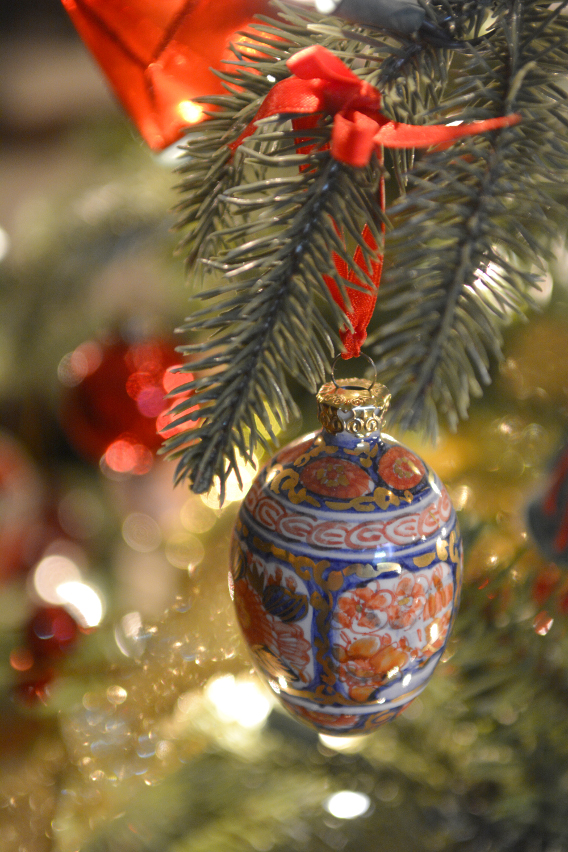 This orange and blue, hand-painted egg bauble is a souvenir from H and I’s first trip to the Netherlands in 2012. I had originally wanted to buy an ornament directly from the Delftware factory but we spent so much time in the museum that we had to run to catch our train back to Amsterdam and didn’t have time to stop in the giftshop. The ornament addict in me was heart-broken so the very next day Hubby took me to one of the Delftware shops in Amsterdam and we picked one out for our collection together. It’s a wonderful memory and by far my most expensive ornament.

The chocolate covered strawberry is just another “gourmand” ornament and can be bought from Sur la Table here. 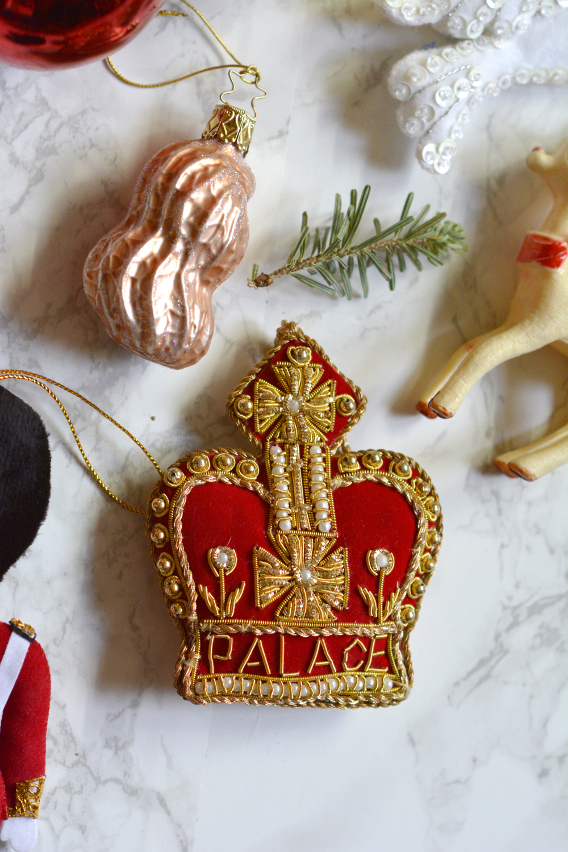 In August 2011, H and I had the opportunity to tour Buckingham Palace during our visit to London. The palace itself was incredible to see in person with a display of Fabergé pieces from the Royal Collection on exhibit that summer. But the absolute highlight was the Royal Wedding Exhibit where we had the opportunity to see the Duchess of Cambridge’s Alexander McQueen wedding dress on display. The details of the dress and it’s unbelievable elegance in person was astounding to see and I bought this Buckingham Palace ornament (as well as a Royal Wedding ornament I forgot to shoot for this post… next year!) as a memento. 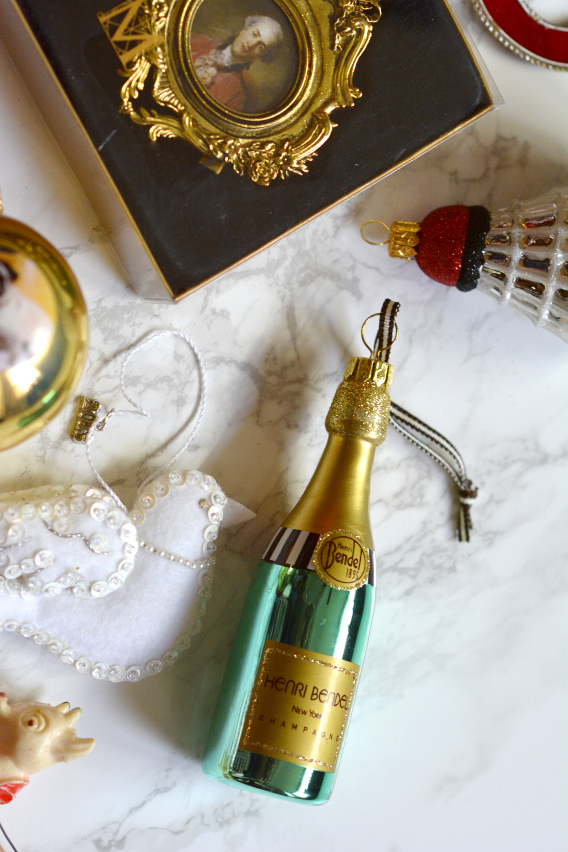 Before the holidays, Jackie and I were out for an event on Michigan Avenue and stopped into Henri Bendel right after they put out their 2014 Christmas ornaments. Since she and I both share an unabashed obsession with all types of bubbly, when I saw this champagne ornament I had to add it to my collection (ON SALE here). 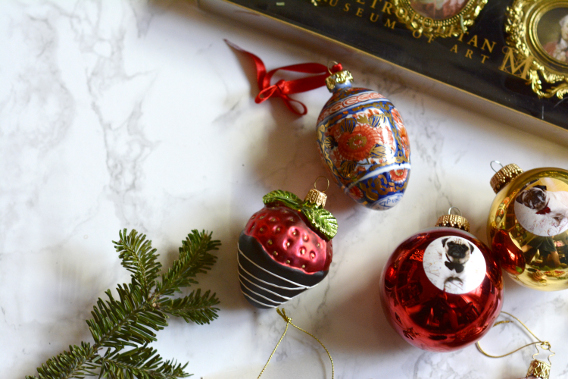 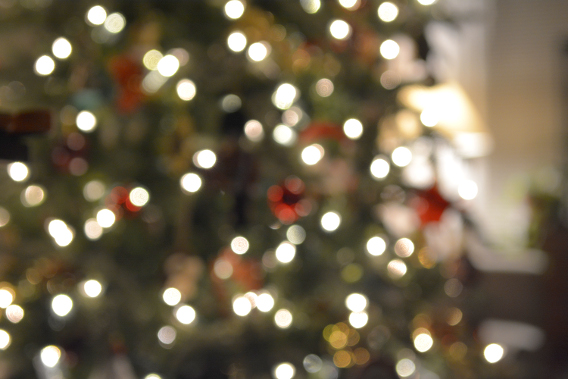 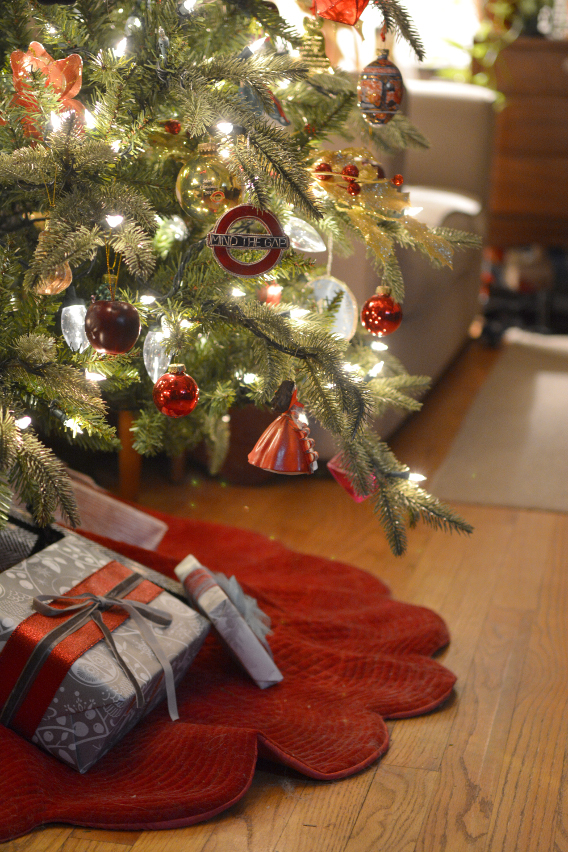 This is just a small sampling of the enormous collection I’ve been amassing for the last few years. I confess to my addiction whole-heartedly!

Now tell me, do you have a knick-knack addiction of some kind? 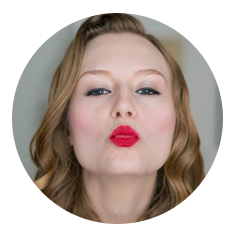 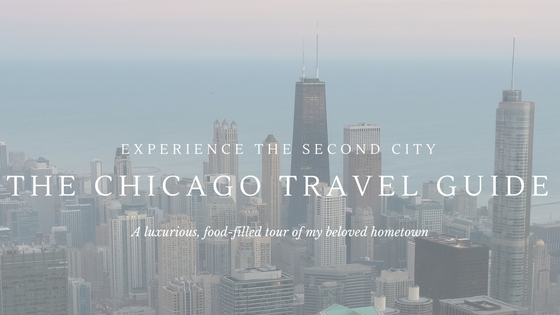 Bastille Day at the …